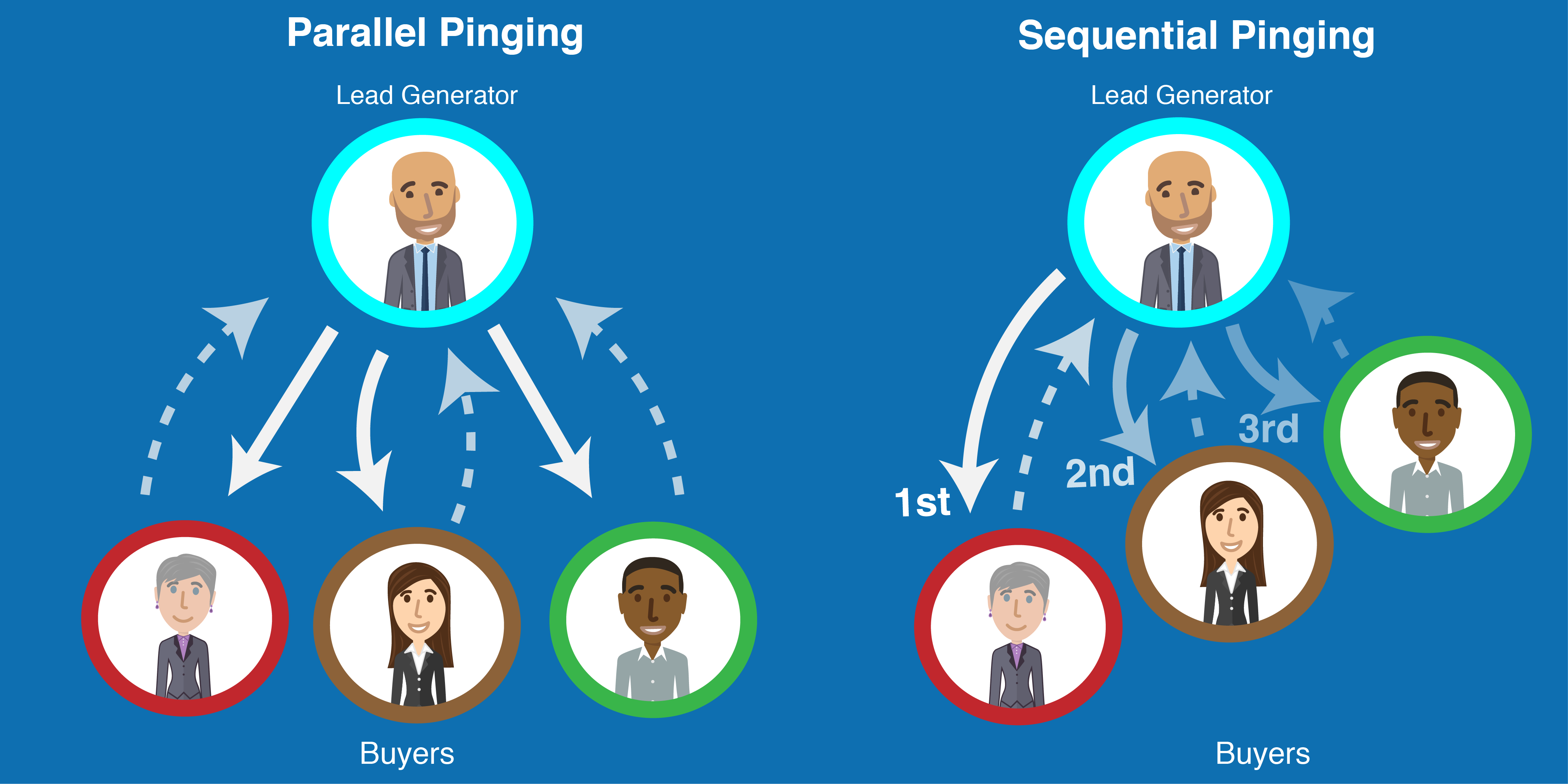 What is pinging in parallel?

Ping post is a common term in the lead industry these days, so many people assume that all ping post software processes leads the same way.  While there are certainly common traits among ping post software, the devil is in the details when it comes to being able to efficiently and effectively operate in this environment.  One important difference in how software operates is how the ping is sent to potential lead buyers.  While some may send out pings in sequence (one at a time, waiting for the response before pinging the next buyer), there is a more effective way to make sure a lead seller can process each incoming lead, whether it is from an internally-generated campaign or a ping from a third-party lead seller.  That way is known as "pinging in parallel."

Rather than pinging buyers one at a time, boberdoo determines all potential buyers and pings each one at the same time, collects the bids from each potential lead buyer, and then creates the best revenue scenario for distribution.  This process allows you to ensure you return a bid back to a lead seller's ping in a timely manner before any timeouts are met and prevents one slow buyer from holding up your entire lead distribution.

As we approach the end of 2018, there are some days in which boberdoo clients process over 30 million inbound ping requests.  This number does not include pings that we are blocking for duplicate reasons.  For an auto lead, you may block a duplicate ping if you have already seen the same make, model, year, and zip code from the same source within the past 10 minutes. Some may want to even block more tightly and remove the source. There are a lot of duplicates and it can create a fog; it is a lot of volume to process, and many do not think it is worth it.

Are there really 30 million unique people filling out forms in a single day?  No, no way.  A good portion of the volume is immediate duplicates from different sources and leads that vendors are reprocessing throughout the day, over and over. 30 million is just the inbound side. The outbound number is bigger (typically about 5-6x) since most pings can be sent out to many potential buyers. These are 5 lessons we have learned over the years from dealing with this ever-growing inbound volume.

Once boberdoo receives an inbound ping and determines the potential buyers, we send out pings to those buyers in parallel. There is an overall timeout based on the source and we keep a running clock to monitor that timer. If any of the buyer(s) have not responded to our ping before the timeout hits, we exclude that buyer and build a scenario based on the pings we did receive. We feel you really must process pings in parallel this way, or even one dead buyer system will cause issues for everyone if you are going through the potential buyers in serial, one ping at a time. The only place that still really exists by necessity is with payday leads.

Be aware of the "Ping of Death."

Many people new to the lead industry think there are countless opportunities to arbitrage leads. “Oh, I can just sign up with Seller A and take a small margin and sell to Seller B.” Yes, it does still work sometimes but most legitimate and established lead companies already work with every other legitimate and established lead company. The times we do see it work is when companies take illogical and inconsistent margins out during the processing. Here is an example.

Logically it does not make much sense with that unnecessary middleman being in there. Maybe B does not really like A. Maybe C claimed to be generating leads via SEO when really they are just reselling from A. Laugh all you will, but we see it happen all the time. This setup can also be the cause of the Ping of Death.

A pings over to B, B->C, C->D, D->B, B->A, A->Z and etc., etc., etc. The same one ping can go around and around between lead companies since there is so much cross selling. We have seen many other lead buyers’ systems go down because of the crazy volume that can be produced by this Ping of Death. Somewhat reasonable duplicate checks are required, otherwise you will eventually have problems and your buyers may also get annoyed if you are sending them virtually identical pings at 60/second (and just reuse responses if they have already accepted the same exact ping a second ago). Say no to the Ping of Death.

With all of this volume, you really must have some safety mechanisms in place. Setup both lead buyers and sellers to have daily or hourly limits, so if there is some incorrect configuration or burst, you are not accepting a huge number of leads by mistake.

10 years ago systems, could take 5-60 seconds to process outside validations, do deduping and other queries in order to accept a post. That is no longer the case. We rarely see leads taking more than 30 seconds to process, even if you are attempting each ping to 30 buyers. The only time it takes more than 30 seconds is if one of your buyer’s systems is dead and you are hitting timeouts. The backlog causes problems for everyone in the ecosystem, so do us all a favor and set some realistic timeouts.

If a buyer's system goes down, shut them off.

Be nice and notify the lead buyer of the issue; they may not even be aware. It happens to everyone now and then.