Everyone knows about Facebook, Instagram, LinkedIn and Twitter, but with it being 2019, let us take a look at the different apps that could bring your lead generation social strategy into the now. LeadCouncil's 2018 report states that 66.7% of lead buyers and sellers consider social media to be in their top 3 for lead performance in terms of quality and the ability to scale volume. Obviously, with numbers like those, the lead generation industry is shifting towards social media.  Everyone knows how to use the big four of social media for lead generation, but with video becoming more prevalent (projected 80% of all internet traffic and 66% more qualified leads per year), other platforms are gaining quite a bit of traction. 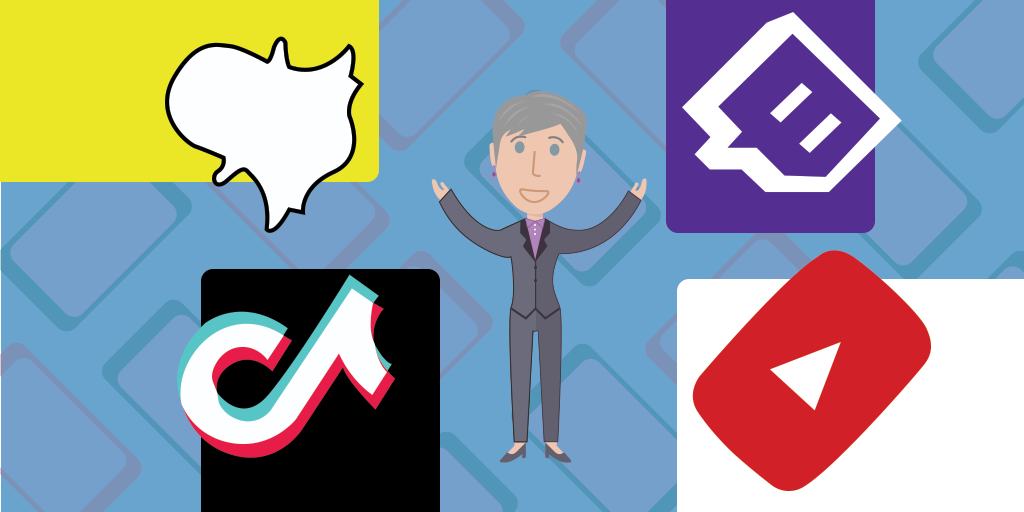 We predicted SnapChat lead generation would be coming, and here it is. For those of you who have been living under a digital rock for the last few years, SnapChat is a messaging app that is known for having different filters that you can put over your camera. Within the app there are also Stories, which allow you to post pictures or videos that last for 24 hours, which are public to all friends on SnapChat.

Reaching out to new users can be done using Snap Ads. These can drive users to your website or app with a single swipe. Remember those stories from before? Well, when users are watching their friend's stories, advertisers can put ads that show up between each story video. Using SnapChat, you can promote gated content or a newsletter subscription with your own stories for the people already following you. Custom filters and AR lenses can also be used to promote, but you may need a good designer to take advantage of them.

The nicest thing about SnapChat advertising is their targeting. With over 188 million users that are on the app every single day, it is a pretty tempting pool of people to advertise to. You can target different SnapChat users by: interests, behaviors, demographics, and location. There is also the ability to use retargeting campaigns, as well as lookalike audiences.

Other than using it for lead generation, SnapChat can be a great way to connect with your leads, as well as nurture them in a more personal way. SnapChat stories can be a way to communicate on a broad basis with all of your followers. You could make announcements, giveaways, or even do a Q&A or a live demo through them. Other than stories, users could message you directly; this is a way to build rapport  and help clients or prospects.

TikTok is currently like the shiny new toy all the kids want for Christmas,. It is everywhere. In the past few months, the app has skyrocketed in users and popularity, and really is picking up where Vine left off. What is it, you might ask? TikTok is where you can upload a 15 second video clip, most of which are people lip-synching or reacting to something. What does this have to do with lead generation? Well, as stated above, video is becoming increasingly popular and TikTok is a new platform for it, and one that people obviously like using.

Even though the user base is younger right now (41% of users are 16-24), that is not to say that older folks are not going to be using this soon. Snapchat and Instagram had younger users at the start, and now there are quite a few grannies that use them as well; even my grandma has one. Even if TikTok does not seem like the right target market at the moment, it is still smart to keep an eye on it, when other demographics decide to download it.

In addition to the platform's popularity, advertising has recently rolled out on it. So far, since ads have rolled out, they will only play when the app is launched. But with over 1 billion downloads, that is a lot of eyeballs that the ads are appearing in front of. With adverting being newer on the platform, there are sure to be other ways ads will be implemented as time goes on.

Another digital trend that is gaining popularity is live streaming - you can even go live on Facebook and Instagram. Although, the forefront runner of live streaming has to go to the Amazon owned video game streaming service, Twitch. Now before you see "video game" and start heading for the X on the tab, hear me out. Twitch does quite a bit more than just video games, people stream everything from creating artwork, calling scammers for fun, cooking shows, people playing musical instruments, to really anything within the guidelines that could be live-streamed.

As far as advertising and lead generation, on average, Twitch has is more than 15 million every single day, which is both a highly targeted and engaged audience. 81.5% of these users are currently male (even though more females are going to the platform), so if you need leads that are specifically men, this could be your gold mine. Basic advertising on Twitch is simple. There are banner ads as well as video ads; these ads can send those users to your landing pages.

Yes, YouTube might not be new, but with video and live-streaming moving in the direction that they are, video lead generation is becoming a necessity. This is especially true with YouTube being the second most used search engine, right behind Google. This is both because videos are entertaining as well as informative, and normally someone would rather watch how something works than read about it. Advertising on YouTube is very simple, especially if you already have a Google Ads account. Since YouTube is owned by Google, you can set up ads and target people right from Google Ads!

If you have your own YouTube channel, you can add a CTA that leads to your landing page anywhere in your video, and you can even tell people to click on it! If you are already creating blogs, webinars or other types of content, they can easily be turned into videos for double the reach. Videos are also good for SEO, so get those cameras rolling. If you do no have anyone who knows how to create videos, even just a video slideshow with some text works, or you could hire someone from Fiverr to create a video for you.

While it is exciting to jump into these new social media platforms, the number one most important thing is to make sure that the platform matches your use case. Many of these platforms have a younger audience, so if you are targeting grannies, you may want to just stick with the regulars for now. Although, these audiences are growing and will probably spill into other generations sooner rather than later.

boberdoo has been in the lead industry since 2001, and we have seen changes, as well as shifts in marketing for all those years. We keep up-to-date on everything lead generation and distribution, so find out about it when we do by subscribing to our newsletter above. If you buy or sell leads, you should also check out our lead distribution software. If you start generating more leads from these new platforms, you should be using a distribution system that allows your business to scale. Request a demo today to see how boberdoo can take your lead buying or selling to the next level.